On a mission for innovation and translational science! 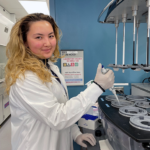 The program was named to honor UNC’s Biomedical Engineering Department founding chair, Dr. Carol Lucas, and also to recognize her contributions to the field of biomedical engineering.

Congrats Jasmine on this terrific achievement!

The NIH-funded NC TraCS Institute at UNC is a CTSA hub founded as a service to the research community— guiding investigators and study teams through clinical trials and regulatory approval, all the way to implementation … Continued

HIV clinical trials have shown that the protective efficacy of daily antiretroviral drugs for the prevention of HIV transmission correlates with adherence – whether an uninfected person takes the prescribed medication at proper times. But … Continued

Women and girls are disproportionately affected by the HIV/AIDS epidemic, comprising more than half of the estimated 37.9 million people living with the disease. Moreover, according to United Nations AIDS, some regions of the world, … Continued

Adherence to a strict HIV regimen is an essential part of effective HIV treatment. Medication should be taken every day, at specific times of the day, and with or without certain kinds of food. Making … Continued

Rahima Benhabbour has always been an advocate for women’s health issues. As an assistant professor in the UNC/NC State Joint Department of Biomedical Engineering and an adjunct professor at the UNC Eshelman School of Pharmacy, … Continued

On a mission for innovation and translational science, Rahima Benhabbour is using 3D-printing technology and her startup company AnelleO to create a breakthrough in women’s health.

Dr. Soumya Rahima Benhabbour is from the North African country of Morocco where, according to UNAIDS, there has been a 42 percent reduction in new HIV infections since 2010. That’s good news to Benhabbour, whose … Continued

The long-acting antiretroviral drug formulation, developed by UNC School of Medicine researchers Rahima Benhabbour, PhD and Martina Kovarova, PhD, is injected under the skin and forms into a solid implant that dissolves slowly to release … Continued

UNC to Create the Next Generation, Ultra-Long-Acting Antiretroviral Formulations for HIV Treatment and Prevention

New project aims to provide long-lasting HIV treatment and/or protection from a single injection. Angela Wahl, PhD, Rahima Benhabbour, PhD, and Martina Kovarova, PhD, are collaborating to lead the work, which is funded by a … Continued

Rahima Benhabbour is a woman on an amazing mission. Not only is she a professor at the Eshelman School of Pharmacy University department in Chapel Hill, North Carolina she’s also founder of AnnelleO, a 3D … Continued

Three faculty-led startups at UNC-Chapel Hill are moving closer to commercialization after receiving more than $89,000 in funding from the university’s KickStart Venture Services program.

Discover the Innovation and Translational Science Happening in Our Lab